Have you ever gone grocery shopping with a baby? It's not easy, as a matter of fact, its exhausting. It should be an olympic sport - who can get into the store, get everything on the list, pick the best check out line and get into the car BEFORE the baby has a meltdown. I say it should be a sport, but I wouldn't be able to compete - pretty much because I am NEVER successful.... though I was almost successful once, it was a glorious day.

Let me back up slightly, the day before this trip I had been looking over my google reader and was immediately giddy with a new post from the letter 4.

**I need to confess that I have, as Miranda would say, a complete blog crush on this site. It's blog written by four sisters, all with names that start with the letter J. I would ask to be adopted but they already have a Jamie, story of my life! Oh well.**

On this particular post there happened to be a printable for a grocery list. I pinned that sucker ASAP - see?? 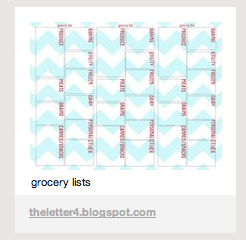 I thought that this could be the answer to my disorganized grocery prayers. The list breaks everything into categories, so if you need apples, just write that down in the produce box that's already there for you! I love things that organize my scattered brain!
It also made me think of something else I had seen on Pinterest that I hadn't bothered to pin. I have now learned a valuable lesson, always, always, ALWAYS (did you hear me??) pin something when you see it, even if you may never use it again. You will never, never, NEVER find it again when you want it. That's right boys and girls, I never found it, but I did find this: 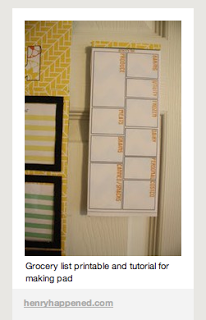 It was a similar pin to the one I was searching for, from the letter 4 by way of henryhappened  about making a pad AND it using my beloved grocery pad as the example! So off I went and sort of created a list from this pin and the one that is lost in the depths of Pinterest.
I won't bore you with every little detail of this because it could get long, but let me tell you a couple hints. 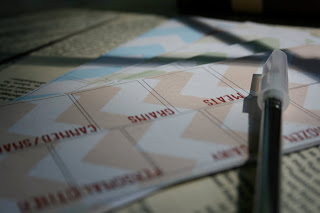 Go over and print a list from the letter 4 - print a whole stack and take them to an office supply store. I got mine cut for $1.50 and they are perfectly straight and even. I don't think I could say that if I had cut them all myself, but you go ahead and try it if you don't believe me and let me know how it goes. 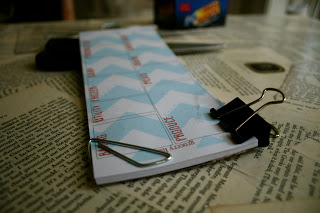 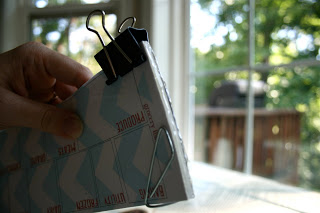 Here is my other tip for you - when I was glueing all the paper to my amazing cereal box backing, I clipped it all together with binder clips that I had laying around. It made everything a little tighter and held the paper together as I was glueing.


I put at least five good swipes of hot glue on the pad for good measure (but I'm sure three would have been just fine). After the pad was all finished, I glued

a magnet to the back of the pad so it can hang on the fridge. Yes, I took a picture of it and no, I am not going to show it to you because I don't want you to see how badly I need to moisturize my hands! 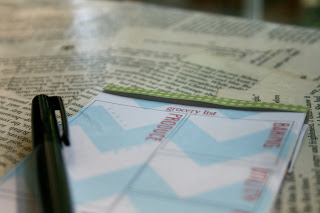 My Amazing Grocery List Pad
Now back to how this made my grocery trip almost a success (I know you are dying to know). It could have been that everything was broken up so nicely on my list, I went whizzing through the store. Or maybe it was the fact that Macie could hold/eat the part of the list I was finished with and I was still able to read the part of the list I needed without her slobber all over it. I'd like to think it was the way the list was broken down though.
I know, this all sounds successful to you, and it was. If only the list could've helped me pick the right check out line, then it would've been a complete success and not another day with me leaving the store juggling a cart and a crying child.
Oh well, I can always try again next time. Happy shopping!