Have you ever had one of those days? Please tell me that I am not the only person in the world that has THOSE days...even if you're lying,  tell me you know what I mean just to make me feel better.


Let me back up, I do my meal planning for the week and without fail, I forget something that I need for a recipe and have to make an extra trip to the store (which is not close)... always a frustration. For some reason this week, I had it all! YAY ME! I think it was because of my new little grocery organization pad (more about that to come), but either way, I had everything, and then - I didn't, and the downward spiral began.


The other day Allen asked me if he could eat the orange in the fridge and without thinking I said "sure, I don't even know why I bought it." This morning, I found out... it was for dinner. No problem, I'll pick up another one today and run home to make dinner since it was a slow cooker recipe (you know, for the ease of it all) ... or not. I set out for my errands with Macie (and all her gear) and after getting to the bank, I realized,  I don't have my wallet... time for plan B. There was no way I was going to be able to go home, get my wallet, go back to the store and get home again and make this dinner. Instead of giving up on it though, I still try to make it work (thank you Tim Gunn) ... well, I failed. I couldn't get it together and still eat dinner before midnight!! WHAT WAS I GOING TO DO??? THE CLOCK WAS TICKING!!! And then I remembered.... 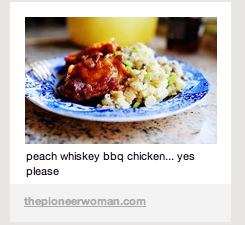 Pinterest to the Rescue!!! I had just pinned a recipe from the amazing The Pioneer Woman and thought that I had everything for it, so I started thawing out some chicken... STAT! There was a key ingredient I was missing however, so I had to text my dear husband and ask him to pick it up on his way home. This is what I said "Can you pick up some whiskey on your way home?" Yup, that's what I texted. I so wish I could've seen his face when he got it. Unlike Ree (yes, we're on a first name basis) I don't keep whiskey in my bedside table, so I'm sure he was a little at a loss when he got the text. He's a good husband though, so he came home with the whiskey and the cooking began! 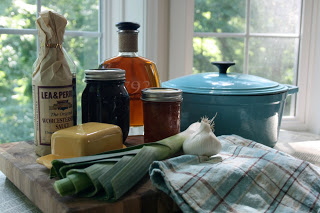 Now, if you look at my lovely picture of ingredients you will notice a big leek. This was my own addition because I was out of onions. Also, I used my homemade BBQ sauce and my homemade peach-scotch bonnet jam that I had canned (Allen and I may or may not have licked the jam jar because it was so stinking good).  Okay now that we've gotten my changes out of the way - here's the recipe (downsized since I don't have a whole ranch to feed).

Preheat oven to 300 degrees.
Heat oil and butter in a heavy pot over medium-high heat. Place chicken thighs, in the pot, skin side down. Brown both sides, then remove to a plate and repeat until all chicken is browned.
Pour off half the grease, then return pan to stove. Add leeks to pan and stir, cooking for 2 minutes. Pour whiskey into the pot, being very careful if you're using an open flame. Stir and scrape the bottom of the pan, allowing whiskey to reduce for a minute or two. Pour in barbecue sauce, peach preserves, water, and Worcestershire sauce. Throw in garlic cloves. Stir until combined, then return chicken to the pot, skin side up. Cover and put pot in oven.
Cook for 1 1/2 hours, then remove from oven. And this is what you have for dinner: 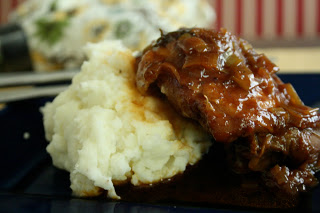 OH yeah, you know you want it. You know you are drooling a little right now.... trust me, it was GOOD. I mean, go out and get the ingredients right now good...and no, you cannot have any jars of my jam. I will fight you... now go get some whiskey.