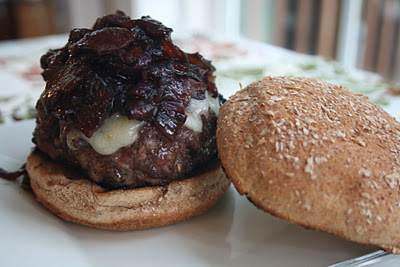 Burgers are just plain yummy... and unlike Miranda, I believe that bacon is just plain yummy too. I am constantly trying to find "the perfect burger." I have had some really good burgers, and I've made some pretty tasty burgers, but can I tell you a secret?? When I saw this pin from Annie-eats (who I love anyway), my mouth actual watered a little... okay, a lot. 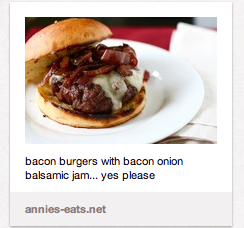 It was an immediate add-on to the menu for the week. Sometimes it just has to happen. I think spaghetti got the boot, not a loss. Here's the recipe so you can do the same! Oh, and yes, I almost completely followed this recipe to the letter. Almost. Shocking I know!!
Ingredients:
For the topping:
4 thick slices applewood-smoked bacon, chopped into ½-inch pieces
1 large red onion, thinly sliced
Kosher salt and ground black pepper
1/3 cup balsamic vinegar
½ tsp. Dijon mustard
1/3 cup water
For the burgers:
2 thick slices applewood-smoked bacon
1½ lbs. ground beef (85% lean)
½ tsp. Worcestershire sauce
1 tsp. kosher salt
½ tsp. ground black pepper
Thinly sliced Gruyere cheese (optional -- though it really shouldn't be)
4 hamburger buns, split
How to Make the Jam Topping:
To make the topping, place a large skillet over medium heat.  Cook the bacon until lightly browned but not yet crisp, about 8-10 minutes (Watch this, bacon goes from brown to crispy in a FLASH).  Transfer the bacon to paper towels to drain.  Drain all but about 2 tablespoons (I used about 1 1/2 tablespoon) of the bacon grease from the skillet.  Add the red onion to the skillet, season with some salt and pepper and cover the pan and cook for two minutes.  Uncover the pan, add water (I didn't use all of it) and scrape any browned bits from the bottom of the pan.  Cover and cook, stirring occasionally, until the onions are soft and beginning to brown, about 10-12 minutes (I turned it down to about med-low because I didn't want them to burn or get tough).
Stir in the vinegar (and step back), mustard and water.  Return the bacon to the pan and bring the mixture to a simmer.  Simmer uncovered until the mixture has thickened and most of the liquid has been absorbed, 4-5 minutes. It will be thick and look like a dark jam.  Transfer to a small bowl and let cool slightly. Try not to eat it out of the pan - it is seriously THAT Good. You can cover and refrigerate it, if you are making it in advance.
How to Make the Burgers:
Finely mince the bacon.  Add to a bowl with the ground beef, Worcestershire, salt and pepper.  Mix until evenly combined, but not overworked.  Divide into four equal portions and form into your yummy burgers.
Heat a grill to medium-high heat.  Grill about 4-5 minutes per side depending on how you like your burger and grill temperature.  When the burgers are almost finished cooking, top with the Gruyere, I know it says optional but I'm telling you, you need it.  Remove the burgers to a plate and let them rest while you toast the buns on the grill.  Assemble the burgers on the toasted buns and topped with the onion jam.
Now Eat. It is amazing. You will love it (unless you're Miranda and hate bacon -- crazy girl). The night we had these, Allen kept saying how good they were... in-between bites. Sometimes, you just can't stop eating! 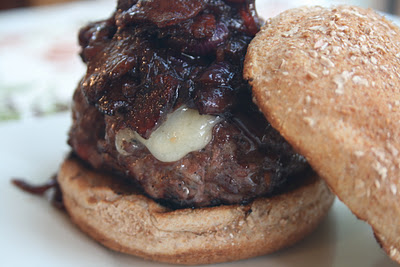