My husband - a Southern boy through and through when it comes to his food - is a fan of simple recipes.  Leave it the way it was originally written - using cookbooks with just WORDS and no pictures...(wha??) and trusting recipes from a few specific chefs only.

Me?  I'm a little more adventurous.  First, I need pretty pictures so I know what my food is supposed to look like when it's done.  Second, I head to the world wide internets first for recipes that have been tried and reviewed by hundreds of every day cooks like myself.  Third, I'll usually change it up a little bit.

Such is the case with the 2 loaves of banana bread that I made this past weekend.  We were heading out of town for a few days, and my bananas were already turning brown.  (I have this love/hate relationship with bananas.  No one in our house really eats them, like EVER...but they are so darn cheap I can never pass them up at the store.  It's a sickness)  We do, however, enjoy a good banana bread.

So...make note of these recipes.  They both resulted in a delicious banana bread that ended up being more like dessert than the simple recipes I'm used to.

The first - Banana Nutella Bread.  I'd seen this on Pinterest and knew I had to try it at some point.  With a banana hanger full of brown bananas, it was first up on my list. 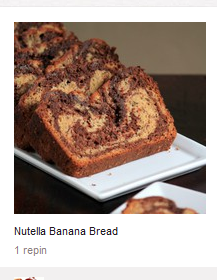 You can find the original recipe at Baking with Basil.  This bread was really tasty - we took it to the beach with us and ate it for breakfast in the morning one day with coffee. 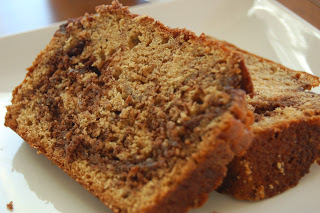 The second pin that caught my eye was this one: 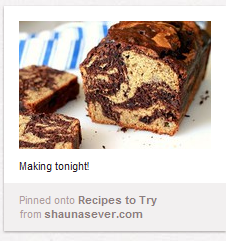 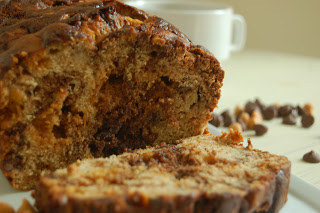 Did you do any baking this week?