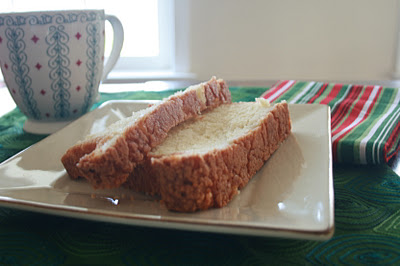 I have to tell you that I am writing this in the midst of a turkey coma - I hope you are reading this in a turkey coma as well. Consider that my excuse for this short and not interesting post about a cake that deserves a lot more praise. If you have been out all night doing some insane Black Friday shopping, you aren't going to notice anyway - go to bed!

One of my favorite days of the year is when Starbucks unleashes the eggnog latte - it's sort of my symbol that the Christmas season has come. I love eggnog - I hate eggs. Yeah, I don't get it either. Because of my love of eggnog, when I saw this pin, it warmed my heart. I knew I had to try it, mostly because I love pound cake almost as much as I love eggnog - what could be better than the two uniting into one glorious cake?? 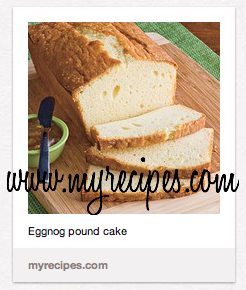 When I looked at the recipe from My Recipes, I found that it called for a box cake and well - those aren't allowed in my house. I don't bake much, but if I'm going to bake it's going to be from scratch. I don't judge box cakes for others though so feel free to use one if you want. If you don't want - Here's the recipe that I sort of devised. I took my family pound cake recipe and went to town! The cake itself turned out great - it is not overtly eggnogg-y, but it has just enough of the flavor to say yum. I suggest you grab an eggnog latte and a slice of cake and listen to some Christmas music. Just a suggestion.
Eggnog Pound Cake --  printable recipe
Ingredients:
1 C Butter
1/2 C Crisco
3 C Sugar
5 Eggs
1 tsp Rum (or Rum extract)
3 C Flour
1/2 tsp Baking Powder
1/2 tsp Salt
1 C Eggnog
Preheat the oven to 325. Mix together Butter and Crisco in large bowl. Add sugar and rum. Once incorporated add one egg at a time to the bowl, mixing for one minute in between each egg. In a separate bowl mix flour, baking powder, and salt. Alternate adding the flour mixture and eggnog to the butter mixture until all has been incorporated. Put into a lightly greased/floured pan. Bake for an hour and ten minutes or until brown and toothpick comes out clean.
Glaze:
1 C Sugar
1/2 C Water
1 tsp Rum (or Rum Extract)
Bring to boil (no longer) and then add Rum. Brush the glaze onto the warm cake. 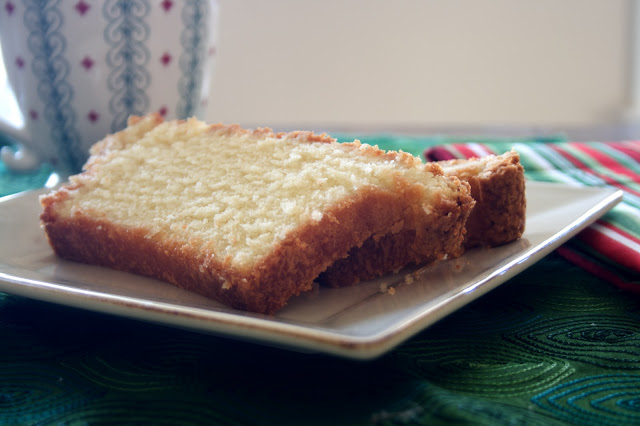