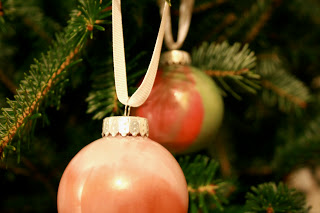 I think I've told you before that Christmas is my favorite time of year. I usually love it - I say usually because this year I am feeling a little grinchy. I can't tell you why, I just am. It may be that Christmas snuck up on me this year.  It may be that my heart is two sizes too small or it may be that my hard drive, full of Christmas music (we are talking gigs of music), is frozen and won't release my Bing Crosby. It's just holding him hostage in there. He's not alone though, he has Louie Armstrong, Rosemary Clooney, Ella Fitzgerald and even Bono and Martina McBride to keep him company. It's wrong... just wrong! If any of you are computer geniuses out there and can tell me how to fix it, let me know. I'll rig a giveaway for you! I'm kidding. I won't do that... but I'll love you!! That's better than winning a giveaway, right? right?!?

Fine, moving on... Today I was trying to get my butt back into the Christmas spirit so I decided to make some Christmas ornaments because I am scared to try making stocking. My fear is real. They look scary. The ornaments were not as scary however. I had seen these beautiful Christmas balls on Pinterest and instantly wanted them.

Of course as Pinterest does,  it sucked me in. I clicked to find a little tutorial on a way to make "similar" Christmas balls. People, there are not the same. It was time to make a few changes. Here's what I did. 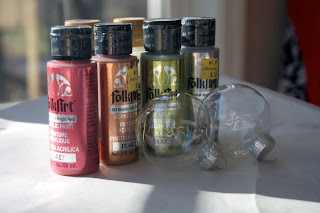 I gathered up my supplies. It's a short list. I got some glass Christmas balls for $1.00 on sale and found some acrylic paint that I already had. It was very nice to already have the Christmasy colors laying around. It proves that the Christmas spirit is usually alive in this house.

I made five ornaments and tried about three different techniques before I found one that I liked. Aren't you glad I did all the messing up for you already? I thought so.


Take the top off the ornaments (I'm assuming you know that though) and squeeze some paint down into the center of the ball. I used three different paint colors so that they would swirl a little. Slowly start to turn the ornaments so that the paint gets some movement. At first you are only going to see one color, but as you slowly move the ball, you'll see the other colors appear. I promise. As you move the ball around you'll start to see that the paint will slowly cover the entire inside of the ornament. After everything was covered. I let the ornament sit for a little while and found that the paint started to move on its own. Because of that, I picked up the ornaments and rotated them a couple times every couple hours while they were drying. I also placed them upside down on a paper towel to get some of the extra paint out of them so they would dry faster. Honestly, that's it. Don't get me wrong, they don't look like those ornaments that were pinned (and the camera was working against me). The ones that were pinned were by a fancy artist who I bet used a brush and a lot of patience, I am not a fancy artist and we won't talk about my patience - so all in all - I think they are pretty cute! 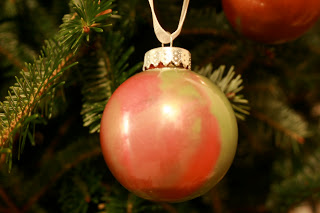 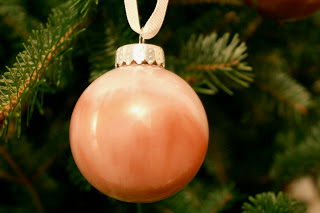 And what happened, then? Well, in Whoville they say - that the Grinch's small heart grew three sizes that day. And then - the true meaning of Christmas came through, and the Grinch found the strength of ten Grinches, plus two!!