Miranda and I have been talking about Christmas stockings for weeks and since we both ended up making them this year, let's consider it Stockings O' Fun Week...

A couple years back I bought some really nice Christmas stockings after Christmas on clearance. I loved them. I even bought one extra stocking with our future child in mind. Yup, I thought I was being pretty slick! Then it happened. We moved. We moved and we had a moving company pack us. For those of you that have never had someone else pack all of your worldly belongings - don't. I am STILL looking for things a year and a half later. Guess what one of those things are?? My lovely stockings. What's even worse? I have the one stocking that I had bought for our future child (who is now here) and I don't have the stockings that I bought for Allen and myself. How is that possible??

Since my stockings have been MIA this year, I have been one the lookout for another solution. Enter Pinterest.


I am not a matchy Christmas decorator like some people (MIRANDA), but I do like everything to have a really homey feel. I think that's one of the reasons that I fell in love with this idea. What is more cozy and homey than a comfy sweater? Keeping in mind that I had no interest in cutting up one of my own comfy sweaters, I was off to goodwill! 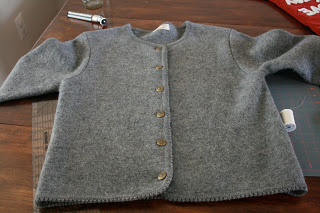 I found a couple perfect candidates for a stocking at the local goodwill and they were only five bucks. I was trying to tell my mom about the sweater/coat things that I bought and she informed me that they are boiled wool. So there you have it, I used a couple of boiled wool jackets.
First things first - lay your sweater out and make sure that it is big enough to make a stocking out of. Next, turn your sweater inside out. Don't roll your eyes at me as though that's obvious. Sometimes people (like me) forget the simple steps and then have to re-do the entire project. Just sayin'.
After your sweater is, a-hem, inside out, lay a stocking you have on hand down on the sweater.  I used the lone stocking I had left from my moving fiasco.

Grab a marker and trace the stocking right onto the sweater. Don't be scared, you've turned it inside out, right?? Here comes the hardest part... sew along the line all the way around the entire outline of the stocking.  The one thing I will say about this step is that it can be tough to sew around the edges. It could just be my machine though. I had to sort of pull the edges through a little to get it started. Once you've sewn the entire stocking, all that's left is to cut it out! Because everything is already sewn up the sweater won't fray when you cut it. After it's all cut out, just turn it right side out and you've got a stocking! 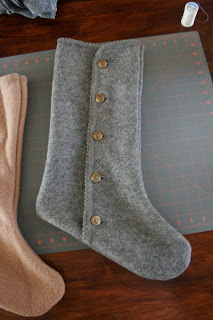 Because I used such a thick sweater, I had trouble getting the ribbon I wanted to use into the seam so once the stocking was all finished I sewed the ribbon onto the back so that I would have a way to hang the stocking. 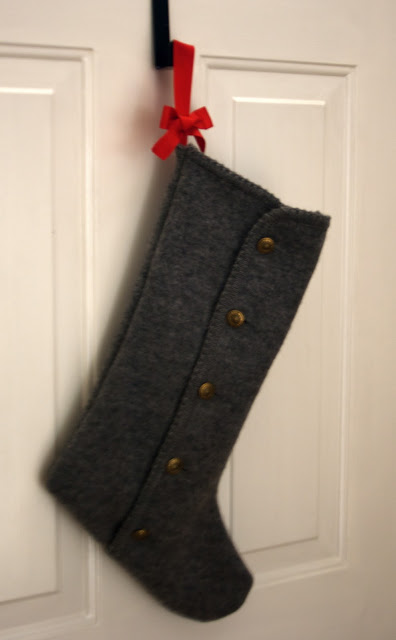 What do you think??
Now if you'll excuse me - I need to bake some cookies for Santa... or Allen.