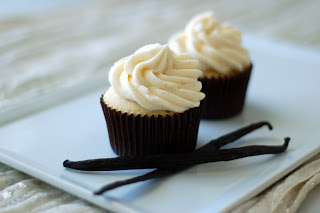 I have never, EVER, in my life made a 'from scratch' vanilla cupcake.  It's true.  I love to bake cupcakes - but I am always drawn to the "fun" flavors.  And if *I* was choosing to eat a cupcake, I'd never choose vanilla.

But this weekend I was going to bake cupcakes for the youth bake sale at church and found myself lingering over a Vanilla Bean cupcake pin.  It helps that it comes from one of my very favorite blogs, My Baking Addiction.  And it helps that it incorporated the vanilla bean into the cake AND the frosting.  It made me feel like it was slightly fancier than a plain ol' vanilla cupcake. 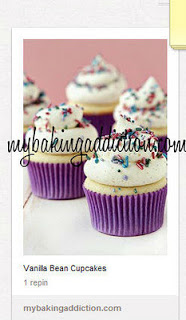 And truth be told, there is something uniquely delicious about Breyer's Vanilla Bean Ice Cream - how pretty are the specks of vanilla bean against the white ice cream?  With visions of Breyer's dancing in my head, I got to work. 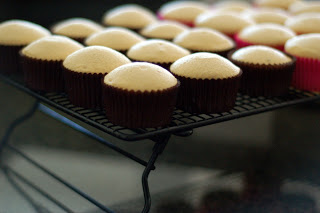 I'll admit it - I didn't have high hopes for this cupcake.  I'm just not a vanilla girl.  But I gotta tell ya - it delivers.  The cake is unbelievably light and fluffy and I'm a sucker for those pretty specks of vanilla bean.  This is not a boring cupcake - it will wow and impress as well as any fancy too many words in the name cupcakes.  (Ahem, Chocolate Velvet with Browned Butter Cinnamon Cream Cheese Frosting...) 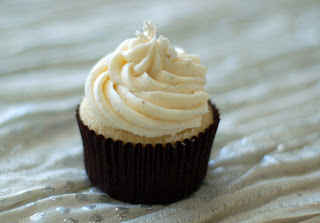 Vanilla Bean Cupcakes with Vanilla Bean Buttercream
Printable Recipe
Yield: 24-26 cupcakes
Ingredients
2 1/4 cups cake flour 1 tablespoon baking powder1/2 teaspoon kosher salt1 1/4 cups whole milk, room temperature4 large egg whites, room temperature1 stick (8 tablespoons) unsalted butter, at room temperature1 1/2 cups sugarseeds scraped from one vanilla bean2 teaspoons pure vanilla extract
Frosting Ingredients
3 sticks unsalted butter
seeds scraped from one vanilla bean
2 teaspoons vanilla extract
1 ½ pounds (24 ounces) confectioners’ sugar, sifted
4-6 tablespoons heavy cream or milk
Directions
1. Center a rack in the oven to 350 degrees F. Line cupcake pan with paper liners.
2. In a large bowl, sift together the flour, baking powder and salt.
3. In a medium bowl, whisk together the milk and egg whites.
4. In the bowl of a stand mixer fitted with the paddle attachment, or with a hand mixer, beat the butter, sugar and vanilla bean seeds at medium speed for 3 minutes, or until the butter and sugar are very light. Add in the vanilla extract and one third of the flour mixture, still beating on medium speed. Beat in half of the milk-egg mixture, then beat in half of the remaining dry ingredients until well incorporated. Add the rest of the milk and eggs, beating until the batter fully incorporated and smooth, then add the last of the dry ingredients.
5. Once ingredients are thoroughly incorporated, give the batter a good 2-minute beating to ensure that it is thoroughly mixed and well aerated. Using a large scoop, distribute the batter between muffin wells, filling each well 2/3 full.
6. Bake for 18-24 minutes, or until a toothpick inserted into the centers come out clean. Cool on wire rack.
Directions for the frosting
1. In a large mixing bowl, cream butter and seeds from vanilla bean until fluffy. With the mixer on low speed, slowly add in confectioners’ sugar, and continue beating until well blended.
2. Add in vanilla, and 3 tablespoons of heavy cream or milk. Blend on low speed until moistened.
3. Add an additional 1 to 3 tablespoons of heavy cream or milk until you reach the desired consistency. Beat at high speed until frosting is smooth and fluffy.

Recipe from My Baking Addiction 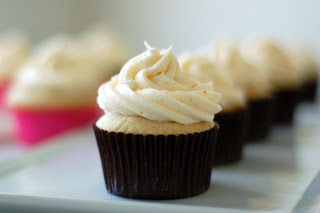 Update: I made these again over the weekend for a sweet little girl's first birthday.  I generally don't use food coloring in frostings, but I really have to admit I adore the way they look - like little spring flowers.
Cupcake liners from Pick Your Plum 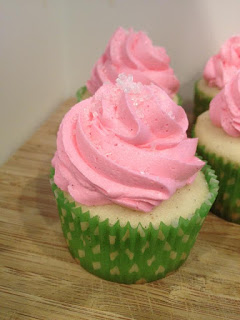