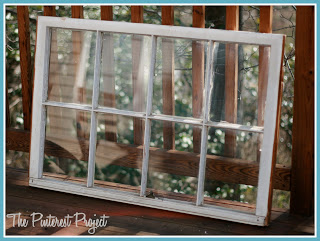 I've decided to organize our family on a window. No, I haven't lost my mind... this time. We have tons of windows in our house and not just the windows installed. A few years ago my parents had to get new windows for their entire house - ouch. It just so happened at the same time they were getting that done, I was poking through some antique shops in North Carolina. I came across these cool old windows and wanted to do something with them. When I asked the store owner how much they were he said "Oh those - they are $75 each. They came out of an old house in New Jersey." Considering that my parents were currently taking a whole house full of old windows from an old house in New Jersey, I passed --- and called my mom. They kept some of the windows for me and I saved myself some cash!
I've made a few mirrors out of the windows and some of the windows are hung in my guest room, but I still have a few left (it was a lot of windows people). Lately I've been seeing some pins that got the wheels turning. 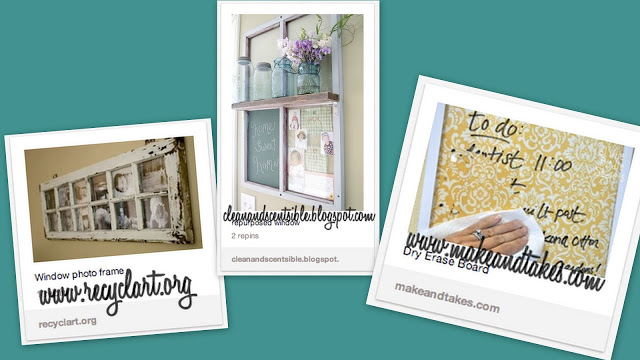 I have always loved the idea of using a window as a picture frame and I have seen dry erase boards left and right on Pinterest so BAM --- IDEA! (And yes, my brain does scream BAM when I get a good idea.) I decided to take all of the pins and mash them together and add a little of my own flair and make an organization board for the fam. 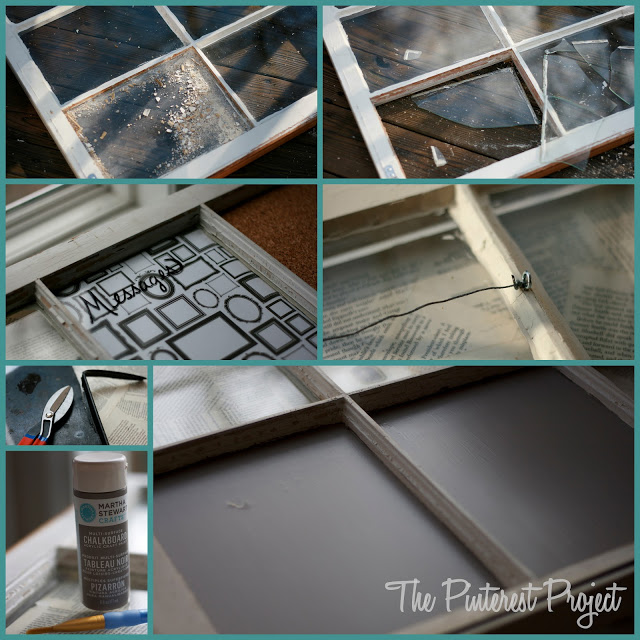 Before I started destroying my window, I drew up a sketch of what I was going to do with the window. It helped me to know how many of the panes I needed to take out. Once I knew that - I started smashing. No I didn't - I'm kidding. Old windows have a ton of caulk and gunk holding the panes of glass in along with metal pins or points. First you have to chip all of that away and take the points out and then you pull out the pane. Even then, they usually brake - so be careful. Clean up and then time to get to work.
I used some chalkboard paint to cover two of the panes of glass. It took two coats of paint to get good coverage. Once it was nice and dry I used some paint pens to write on them but it didn't work out so well, so I went back to regular paint. I moved on to the next pane and made it a dry erase board by hot glueing some paper behind the pane and then a backing for support (check out Make and Take for a real tutorial). Three panes down - five to go.
Remember how I took some glass out of the window? Time to get to that. One of the panes became a cork board (Yup, I glued that in too - with the help of a staple gun) and the other one a magnet board. That was the tricky one. I thought it would be a quick trick to use a cookie sheet. Have you ever tried to cut a cookie sheet with a pair of metal snips? Not as easy as you think. I had to bring in the heavy guns (AKA Allen) to finish the cutting. Once all the heavy lifting was done, I used liquid nails to glue the destroyed cookie sheet into place.
For the last two panes, I wanted them to be fun and have pictures. I just wired them like the back of  a picture frame with eye hooks and wire. Clip a couple pictures on the wire as though its a clothesline and instant picture frame.
If you're counting we've reached seven panes.... that leaves one. And that one is the problem! 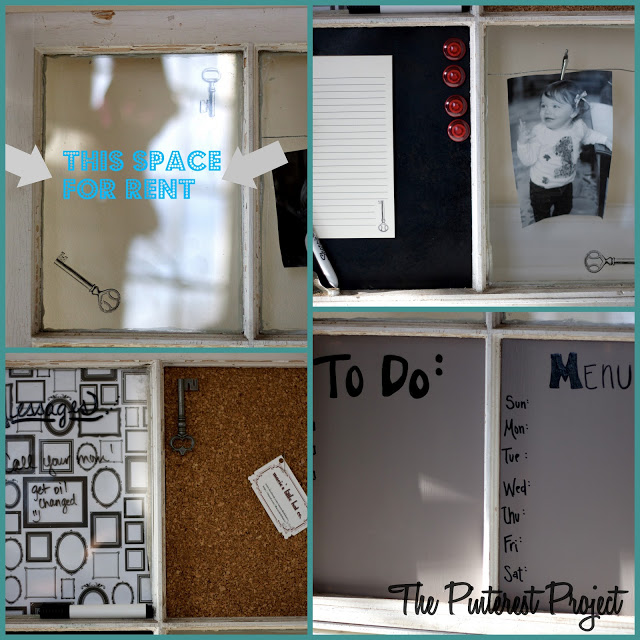 I have NO idea what to do with that one pane. I need ideas people! HELP! I added some cute art onto the window and a key to be used as a pen holder for the magnet board... but I still need something for that empty pane. I officially have an unfinished pin... 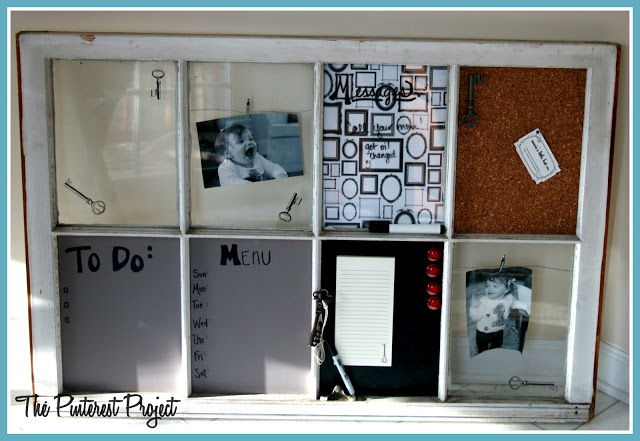