It's been a big week around here people, a big week.  Today, my littlest is 11 months old (what?!) and while my oldest was taking his first steps by now, this one seems to find talking more fun than walking.  He's like his Dad in that way, I guess.  He's been saying "light" and "hi" for a little while but this week he has begun confidently saying "Mama".  (I know all you moms out there are secretly high five-ing me because he said Mama and not Dada first...my husband and I were in a competition to see who could influence him the most - I would whisper in his ear Mama...Mama...)

Not only is he speaking, he's now performing death defying stunts in his crib that include blood and bruises and well, basically terrifying me.  It's been a week of frazzled nerves, highs and lows but I guess that's the joy of parenting, right?

When he FINALLY went down for his nap, I was happy to get started on this project.  Is there anything prettier than a colored jar? 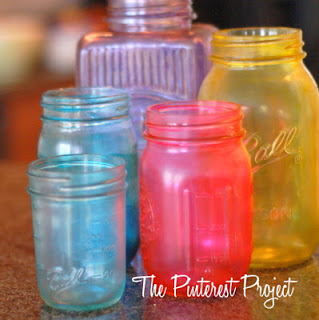 I found this pin from Gingerbread Snowflakes by way of Under the Table and Dreaming.  There was a whole list compiled of 50 ways to repurpose jars and this was one of them. 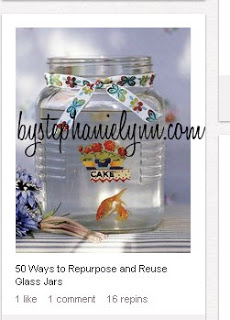 This tutorial is going to show you how you can make your own colored jar with the simplest supplies.  I'd seen tutorials for this project with special glass paints and they required 48 hours and baking the paint on, etc etc.  This one took me less time than Beckett's nap did and used supplies I already had on hand. 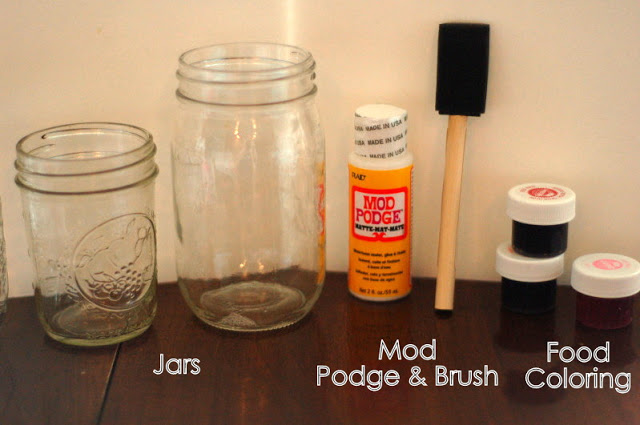 Make sure your jars are clean, mix a good dollop of mod podge and a few drops of food coloring together until you get the desired color.  Then you simply start painting the colored mod podge on the outside of your jar.  This is me attempting to make an "ombre" effect jar... 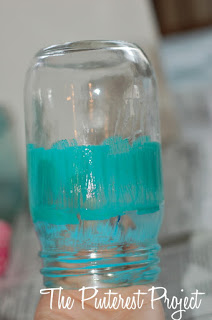 It's really cool to watch how the paint and colors change as the Mod Podge dries. 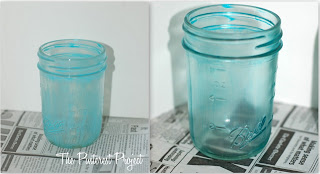 I think they make gorgeous vases or even candle holders! 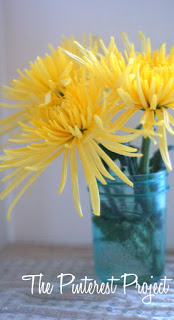 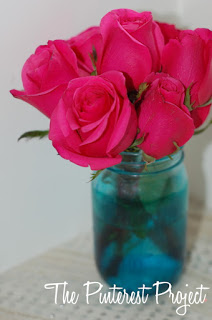 (that's the ombre effect jar...kind of hard to see it)

Are you sick of pictures yet?  I seriously couldn't stop taking pictures of these pretty jars!  I'm thinking about changing the name of the blog to The Jar Project and just featuring lots and lots of pretty jars.  I wonder how Jamie would feel about that... 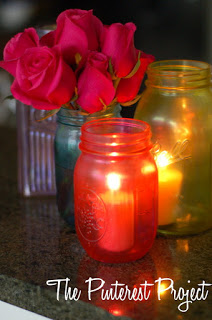 You will definitely need to seal the jars with some spray sealant to help keep the color from rubbing off.  And hopefully this goes without saying, but don't use the jars for food - especially after they have been sprayed with the sealant!  The original tutorial used the Outdoor Mod Podge so you could hang them or use them outside as lanterns which is also an adorable idea. 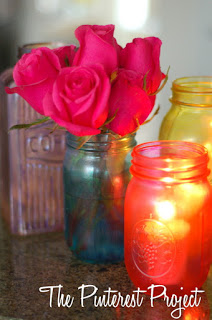 So, there it is - a fun and easy tutorial with endless possibilities.  I was starting to look around my house wondering what glass item I could paint next...