Soup, its what for Dinner 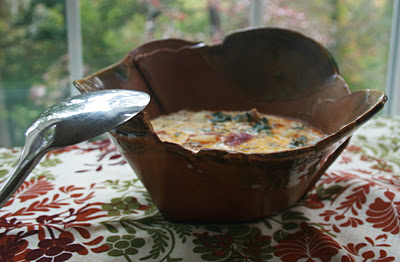 A couple weeks ago I told you about my fun adventures with kale. I know you think that I had dropped the kale kick ... but I haven't. The weather we've been having lately, and pretty much the general fall air, seems to bring out the longing for soup in me. Since I'm already on the kale kick, why not mix the two?? I have had a few different soups that had kale in them and some are well, ehh. Sometimes, they are just broth and kale and no flavor - this one, not so. This one is good. 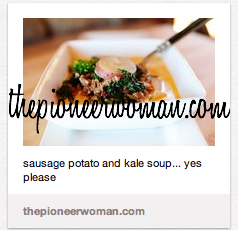 When I saw this post from the Pioneer Woman and knew I needed to make it. Ree calls it a copy of Olive Garden's Zuppa Toscano, and I have to say, I think it's better than Olive Garden - not that I am slamming Olive Garden, I just like to know what goes into my food.  I was going to give you a long story on how to make this soup and all of the changes that I made, but I am going to be honest with you - it has not been that kind of day. Macie had a shot (ick) and she is cutting another tooth so yeah, I've had a super fun day and my brain is starting to shut down on me. Because of the forced shut down from my brain, I don't think a little story about my soup would be very thorough so instead, I'm giving you my adapted version of the recipe with well wishes and say - Go make soup!! 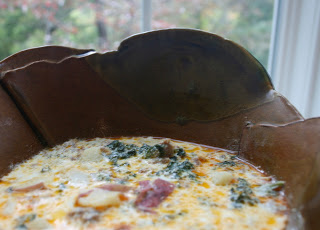 Doesn't it look yummy?? All those potatoes and kale and sausage?? YUM!
Sausage, Kale and Potato Soup - adapted from the Pioneer Woman
Printable Version
Ingredients

Prepare the kale and set it aside.
In a medium pot. boil sliced potatoes until tender, but not falling apart. Drain and set aside.
In a large pot, crumble and brown the Italian sausage with diced onion. Drain as much as the fat as you can off. I used a colander to get it out. Stir in the red pepper flakes, oregano, chicken broth, milk, and half-and-half. Simmer for 30 minutes. You need to be very careful not to let it boil or the milk will start to separate.
Add the potatoes, then stir in the kale. Simmer an additional 10-15 minutes, then serve.
Happy Eating! My brain is cooked.